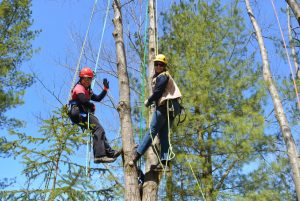 The trees at Fleming CollegeŌĆÖs Frost Campus were filled with female climbers on Saturday, April 22. The tree climb was part of the Women in Trees Conference and Awareness Day, which promotes opportunities for women in the fields of Urban Forestry, Forestry and Arboriculture.

ŌĆ£As women, we are under-represented in this field. IŌĆÖve had parents call me and ask if their daughter could do this program,ŌĆØ said professor Katrina Van Osch-Saxon on why she created the Women in Trees event.

Katrina was speaking to a crowd of women in the Glenn Crombie Theatre at Frost Campus before introducing panelists Dr. Adrina Bardekjian,┬ĀManager of Urban Forestry Programs and Research Development at Tree Canada; Daniele Fleming, Staff Officer at Power WorkersŌĆÖ Union; and Jessica Kaknevicius, Director of Forest Education and Awareness at Forests Ontario. The female industry experts shared their career experiences and inspired the enthusiastic audience.

Adrina shared her journey from climbing orange trees in Italy with her sister to a career with Tree Canada, where she directs the Canadian Urban Forest Network and Strategy. She is also an active board member of the Toronto Cancer Prevention Coalition. She initially started her career path in creative writing, but gradually moved towards this field by putting herself in new situations outside of her comfort zone.

ŌĆ£It took a while to be comfortable being uncomfortable,ŌĆØ said Adrina, who encourages others to learn new things, work with different people, learn from each other, and be creative.

Jessica Kaknevicius agrees. ŌĆ£I like to do things that are uncomfortable and I probably shouldnŌĆÖt be doing,ŌĆØ said Jessica, sharing her experience tree planting in Timmins, Ont., with limited previous nature experience.

Tree planting was a summer job for Jessica when she was a student at the University of Toronto. Her original plan was to be a veterinarian, so Jessica enrolled in the Bachelor of Science program with a major in Zoology; but she ŌĆ£didnŌĆÖt want to put all her eggs in one basketŌĆØ and signed up to double-major with Forest Conservation.

ŌĆ£Growing up outdoorsy isnŌĆÖt a pre-requisite for being in a career in forestry,ŌĆØ said Jessica, who said she did not explore jobs in natural resources when she was in high school. Jessica realized this passion later and encourages others to pursue this career through her role as Director of Forest Education and Awareness at Forests Ontario and as co-founder of Women in Wood, a networking group that connects women in the industry.

A few pieces of advice Jessica shared at Women in Trees are: find a mentor, sell numbers instead of emotions, donŌĆÖt be resistant to change, and donŌĆÖt be a ŌĆ£yes womanŌĆØ (learn how to say no).

Although Adrina and Jessica both have many female colleagues, this was not the case when fellow panelist Daniele Fleming entered the industry in 1989 with Ontario Hydro as the first female Mechanical Heavy Equipment Operator with Forestry Services. It was her first career job after graduating from FlemingŌĆÖs Forestry Technician program that year.

ŌĆ£Was it hard? Yes. I was one of the first women hired,ŌĆØ said Daniele. ŌĆ£I had people say to my face, ŌĆśyou shouldnŌĆÖt be here. You took a job away from a man.ŌĆÖŌĆØ

But Daniele said she proved her ability through hard work and dedication. She also had a supportive manager who believed in women working in trades. ŌĆ£I thought, ŌĆśthey believe in me, I believe in me,ŌĆØ she said.

Daniele had quite the career journey and animatedly discussed it with the engaged crowd. From the humour of doing a CTV interview during an ice storm to the devastation of losing a friend on the job site, Daniele discussed the highs and lows of her career.

ŌĆ£I deserve this job. I worked hard for it,ŌĆØ she said. ŌĆ£[My generation] may have graveled the road, but thereŌĆÖs still some paving to go.ŌĆØ

Daniele hopes to see more women working in the industry, especially in the management roles which currently have very few females. 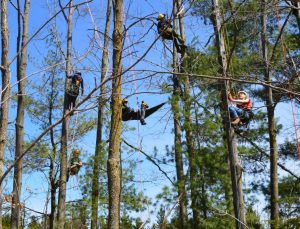 After the panel discussion and networking lunch, Daniele, her fellow panelists and Women in Trees participants were geared up to enjoy a tree climb in the beautiful warm weather.

Stephanie Burns, Forest Operations Coordinator at Forests Ontario, was happy to return to her alma mater for the event. Stephanie graduated from the Forestry Technician program in 2011 and the Urban Forestry program in 2012, and chose to pursue this career because she feels healthier and happier being outdoors.

ŌĆ£I talk to everyone about Fleming. ItŌĆÖs really fundamental for being in Forestry,ŌĆØ said Stephanie. ŌĆ£A lot of the skills IŌĆÖve needed are from Fleming, without a doubt Fleming prepared me for Forests Ontario.ŌĆØ

On the Women in Trees event, Stephanie added ŌĆ£Fleming always has a place in my heart and itŌĆÖs great seeing women inspired to climb trees.ŌĆØ

Tune in below to watch video coverage of the event: