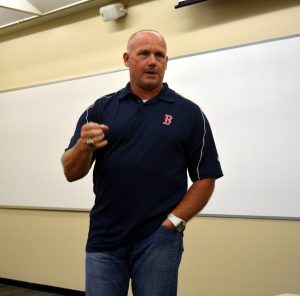 Rick has an impressive resume in baseball, which includes playing on the Canadian National Team for the 1988 Seoul Olympics, the 1987 and 1991 Pan American Games, and the 1985 and 1991 Intercontinental Cup. He served as a scout for the New York Yankees and Tampa Bay Devil Rays, was named Manager of the Year for managing the Toronto Maple Leafs of the Inter-County League in 2001; and served as a technical consultant on “Fever Pitch,” “Angels in the Infield,” and “Batter Up.” Rick was inducted into the Peterborough and District Sports Hall of Fame in 2008.

The co-owner of SST Mississauga gave a guest lecture to Fleming students about achieving goals, as part of the Guest Speaker Series in the Sporting Goods Business program. “Set an achievable goal and, once you reach it, set another achievable goal,” said Rick. “When you reach one, then you set another one on the ladder. You’re not going to climb five steps at once, so set ones you can reach.”

He suggested looking at every opportunity as an open door and considering where it can take you down the road. “Look at everything long-term and start goal setting. Do goals happen overnight? No. Everything has to take time.”

This means doing the grunt work to move up the ladder. “I had baseball experience but I had to learn to coach. I had to do the grunt work and it’s not easy. It takes hard work, and tons and tons of hours.”

His recommendation to those pursuing a career is to network, network, network. “I was massively networking. Networking is something you should be doing on a daily basis,” he said.