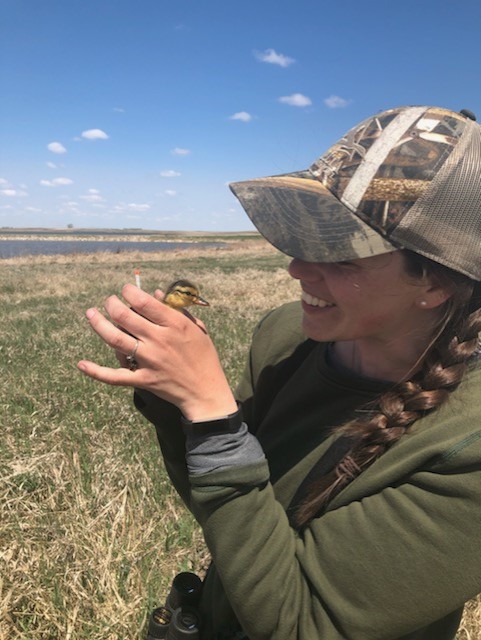 A passion for research and asking questions is what drove Kelly McLean on her education journey, earning diplomas, a bachelor’s degree, master’s degree, and now working towards a PhD. But achieving this level of education was not what Kelly had in mind when she started her post-secondary studies at Fleming College.

“I had never planned on doing a master’s, let alone a PhD,” said Kelly. “I struggled academically in high school, and it wasn’t until I started at Fleming and began studying something I was interested in that I began to achieve good grades and consider university as an option.”

“My interest in doing a PhD has been a cascading effect from my Fleming co-op, as this project is in partnership with my co-op organization,” said Kelly on her PhD research which is a collaboration between the University of Waterloo and the Canadian Wildlife Service.

For her PhD in Social and Ecological Sustainability at the University of Waterloo, Kelly is researching the spatial ecology and habitat selection of sandhill cranes in Ontario and Quebec under the supervision of Dr. Brad Fedy. Sandhill cranes have grown in population and geographic range in the past decade, after being nearly extirpated from their historical range in Ontario in the early 1900s. Since this species forages in agricultural fields, this increase in population raises concerns of potential crop damage.

Kelly is working with the Canadian Wildlife Service to equip 80 cranes with transmitters to determine fine scale habitat use, migration timing and strategies, and help answer ecology questions. This research will help determine which agricultural fields are more prone to crop depredation, and potentially determine methods to prevent or mitigate crop damage.

After graduating from Fleming College, Kelly used Fleming’s education pathway to Trent University and earned her Honours Bachelor of Science Degree in Biology in 2016. She then spent four months working as a Student Migratory Game Bird Technician for the Aquatic Assessment Unit of Environment Canada’s Canadian Wildlife Service, followed by another eight months working as a Wildlife Biologist.

This experience working for the federal government inspired Kelly to earn a master’s degree, wanting to open doors for herself in policy and decision-making positions.

For her Master of Science and Forestry at the University of New Brunswick, Kelly studied wetland buffer width and the persistence of black ducks in New Brunswick under the supervision of Dr. Joe Nocera. Kelly worked with the Canadian Wildlife Service Atlantic Region and Ducks Unlimited Canada Atlantic Region to determine the effects of commercial forest harvesting on the distribution of breeding black ducks.

“The field and logistical planning skills that I learned at Fleming were vital to this component of my masters. I had to navigate in dense forest and identify waterfowl daily, just like a typical day at Fleming field camp. It was the kind of position that Fleming excels at preparing students for, except this time I was the one in charge,” said Kelly, who had the help of a Fleming Fish and Wildlife student on co-op placement and a Fleming graduate working as a technician.

“The knowledge I gained at Fleming is a great foundation that I continually build on,” she said.

For those considering an education pathway from Fleming College, Kelly recommends taking the opportunity.

“You do not have to be the smartest person in the class to continue your education. Hard work and a good attitude are just as important as your GPA,” said Kelly. “The pathways program is a great way to effectively and economically get the best of both worlds and be very employable.”