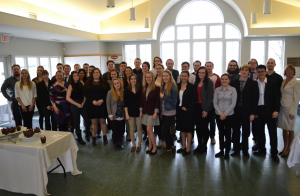 Choosing lichens as the study subject because they are excellent bio-indicator organisms  – they gather nutrition from the air and, in doing so, accumulate air borne pollutants – the group based their research project on a 1966 study on Long Island that showed the further you get from the city, the more lichens you will find. The students’ study focused on Toronto’s city effect on lichens. The students theorized they would find a lower concentration of heavy metals in lichens the further they got from the city.

Studying four sites (each one an increasing distance from Toronto), the students performed an inductively coupled plasma optical emission spectrometry (ICP-OES) test on 17 lichen samples, looking for traces of 14 different metals such as nickel, cadmium and lead. While they found no statistical difference in 13 of the metals tested at the four sites, copper was the exception. The concentration of copper found in the lichens decreased the further they were from Toronto.

While surprised by the results, the students said one factor they didn’t take into consideration was the effect of wind patterns on their chosen sites.

The students’ experimental design project is part of the Ecosystem Monitoring and Assessment course taken by fourth semester Ecosystem Management Technician and Ecological Restoration students. The students presented their projects as part of a conference-style event at the Lindsay Golf and Country Club on April 5.

Organized by faculty member Barb Elliot with support from Jason Kerr, the Ecosystem Management program technologist, the day is set up as a mini-conference to prepare students for real world work within their field, which often requires public speaking and presentation skills. The groups presented their findings to faculty members (Barb, Josh Feltham and Mike Fraser) and their fellow students with the opportunity for questions from the audience.

For each project, the students had to develop a hypothesis, an alternate hypothesis and prediction, and then test out their hypotheses based on study designs, sampling methods and statistical analysis techniques learned in the classroom. All of the projects involve students going out into the field to collect data.

Other projects included a study of the Subnivean Zone, the ecosystem that exists between the ground and the layer of snow closest to the ground; the Effects of Urbanization on Benthic Macroinvertebrates in Jackson Creek; and Determining the Growth Rate and Age difference of Sugar Maples in Urban and Rural Sites.

Taking inspiration from the book What the Robin Knows, Ecological Restoration students Mark, Shannon and Emily focused their experimental design project on black-capped chickadee vocalizations and how they relate to human behaviour.

The book, by Jon Young, shows that you can learn everything you need to know about the environment around you based on bird behaviour and language.

For their project, the students wanted to explore the way human behaviours and actions connect to a chickadee’s vocalizations. So the group chose a ‘sit-spot’ in Kawartha Highlands Provincial Park where they could listen to and record chickadee calls – chickadee vocalizations range from songs to companion calls to territorial aggressiveness and alarms.

As part of the experiment, the students took a baseline measurement and then tested four human behaviours (quiet, such as walking, and loud, such as stomping) as well as predator calls from owls, hawks, and shrikes. Following each test, they took six-minute recordings to capture the resulting vocalizations from the chickadees.

The group reported a significant difference between the baseline and the tests they performed. They found predator calls had the highest response of a warning vocalization – the chickadee-dee-dee call we all know. According to the group, the amount of ‘dees’ on the end of the call signifies the alarm level – the more dees, the greater the alarm. In fact, they recorded one warning call that had 23 ‘dees’ on the end of it.

Their conclusion? They found evidence to support the suggestion that chickadees are affected by human behaviours but that humans are not perceived as much of a threat as predators.

Great job by all of the students on their experimental design projects!