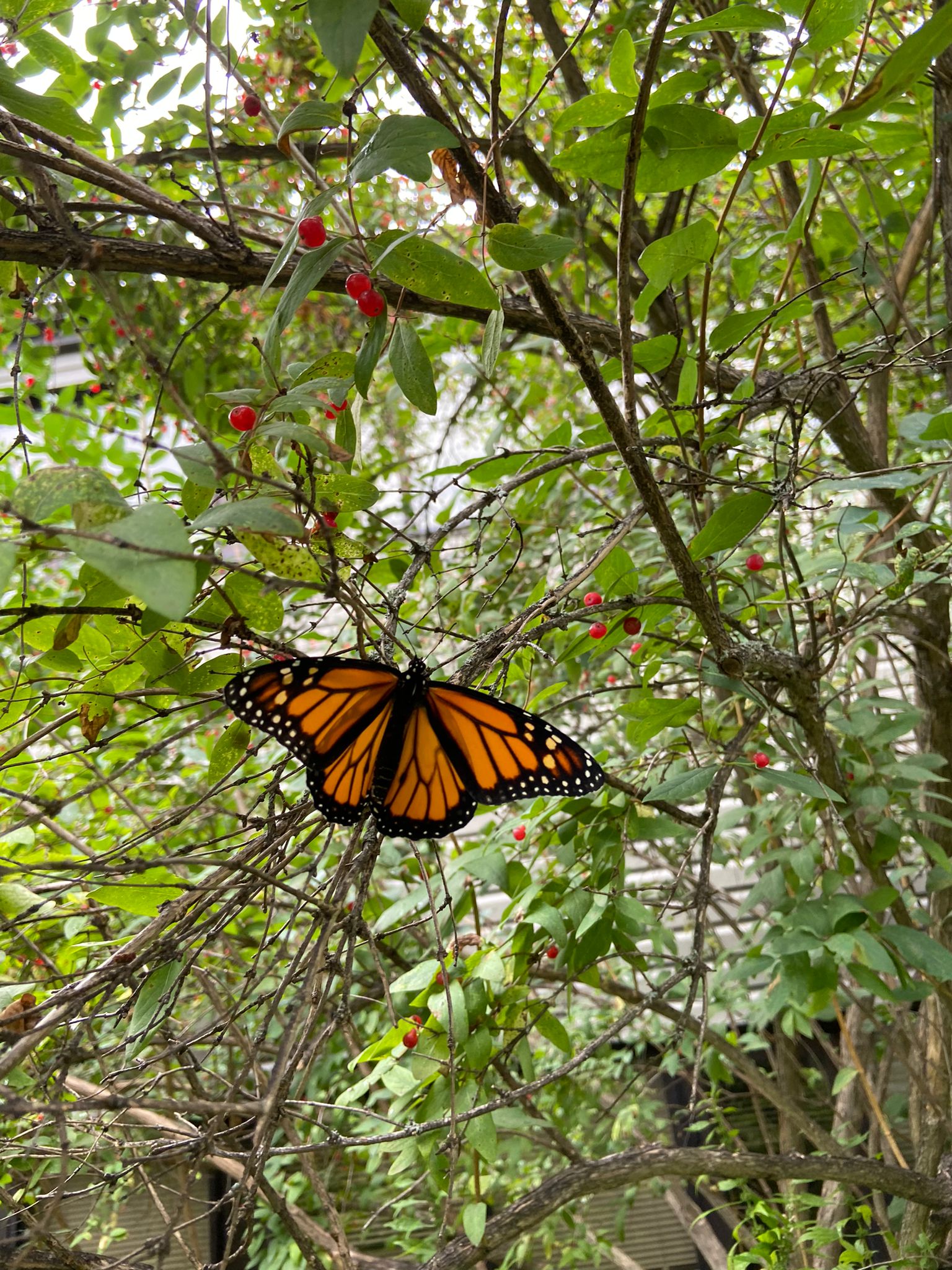 Lindsay, ON – “I actually refer to Fleming as finding my Hogwarts,” Jenna Lynch said with a laugh.

It’s a comparison she makes, she said, because Harry Potter found a sense of purpose and community in the wizarding world, and Lynch has found the same thing at Fleming College.

And like Harry Potter, she never saw it coming.

She certainly didn’t think she’d spend her summer saving Monarch butterflies. She never imagined she would love every minute of it.

“I’m just really happy to be in an environment I can really thrive in,” she said.

Lynch transferred to Fleming after trying a different career path at another institution. But it wasn’t a good fit. She wanted something that promised variety and growth.

“I was just trying to find what was best for me,” she said.

Lynch enrolled in one of Fleming’s duo diploma programs, taking Conservation Biology and Forestry at the Frost Campus.

It was exactly what she was looking for.

Lynch said she’s excelled in areas where she never had before, and found her passion in asking questions, exploring the natural world, and taking deep dives into things she has yet to learn.

“And I found friends who love the same quirky things I do,” Lynch said.

One of those friends is fellow Conservation Biology student Jaime Jackson-who stepped in to help Lynch in her quest to save Monarch butterflies.

That journey began earlier this summer, when Lynch got a job as a summer student at Frost Campus’s arboretum and seed bank.

Part of her duties included ridding the area of copious amounts of Dog Strangling Vine. It is an invasive species that bears a strong resemblance to Milkweed.

Milkweed, Jackson explained, is vital to the life cycle of Monarch butterflies.

Monarch butterflies will lay their eggs on Milkweed leaves. Once hatched, the young caterpillars will feed on those leaves until it is time for them to pupate.

Unfortunately, Monarchs often mistake the leaves of the Dog Strangling Vine for Milkweed. Those leaves have no nutritional value for the hatching Monarch caterpillars.

“They mistakenly lay their eggs there and then the caterpillar dies,” said Jackson.

Lynch began the painstaking process of checking each Dog Strangling Vine for Monarch eggs and caterpillars. The pair extended their search to other areas outside the Frost Campus. Jackson said they’d often check Milkweed growing in places where the municipality was set to mow, saving every egg and caterpillar they could.

Once found, the leaf was gently removed, placed in a clear plastic container, and taken to a makeshift Monarch nursery at the Frost Campus.

From there, the caterpillars were raised on a regular supply of nutritious Milkweed leaves the pair harvested on an almost daily basis.

A tedious job that couldn’t have come at a more urgent time. In July the International Union for the Conservation of Nature placed the Monarch Butterfly on its endangered species list.

“It’s a long time coming, getting Monarchs the classification they need,” Lynch said, adding that more needs to be done if the species will be saved.

Monarchs migrate from Canada, through the U.S. and to Mexico each year. While the species may be protected, Lynch explained that migratory path-and the Milkweed plant -will also need that same level of protection.

She points out that the rest of us will have to do our part to make sure this crucial insect survives, and that can include changing attitudes around what’s considered a garden nuisance or a helpful pollinator.

Unfortunately, Lynch said, caterpillars can be seen as pests due to their need to feed off foliage.

“I think people forget that in order to get a butterfly, you need to have a caterpillar first,” she said.

Lynch also cautions against starting your own Monarch rescue operation. Eggs and young caterpillars are very fragile, and she said those who don’t know what they’re doing can cause more harm than good.

The best way to help, she said, is to plant Milkweed, pull out Dog Strangling Vine and stop using pesticides.

While their work in the Monarch nursery is slowing down, Lynch and Jackson have their eyes set on what lies ahead.

Both have graduated from Conservation Biology, and both are continuing their education at Fleming, enrolled in duo-diploma programs.

Jackson is now pursuing a diploma in Ecosystem Management.

Lynch has begun her classes in the Forestry program and said she’s already looking forward to what’s ahead.

That idea of not knowing all the answers is what excites her the most, she said.