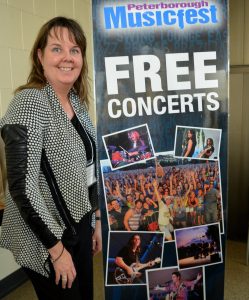 Tracey got her start in hospitality at Peterborough Musicfest, formerly called the Festival of Lights, when she was a Fleming College student. Tracey operated the boats on Little Lake following each performance. But after graduating from the Tourism and Transportation program (since renamed “Tourism – Global Travel”) at Fleming College, Tracey left Peterborough for the Big City.

“Having a three-year program under my belt was huge, especially since it was hands-on and had an amazing co-op piece,” said Tracey on moving to Toronto for her career. “And the soft skills I gained at Fleming helped as well, which my university friends didn’t have. I knew about tardiness, sales and people skills, and public speaking– now I speak to 15, 000 people at Peterborough Musicfest and that’s a skill I gained in school!”

In Toronto, Tracey moved from an administrative role to operations to event management for Unilever Canada. “Keep your options open,” said Tracey. “Your job does not have to be in your exact industry.”

She left the corporate world for a year to volunteer in Africa, where she gained incredible life experience, was able to give back, and feel “grounded.” She continued her travels by working the international Olympic circuit and then she decided to return to her roots. Peterborough Musicfest posted a contract position and Tracey decided to apply.

“It was Africa that grounded me to get out of the business world and move home to Peterborough,” she said. “I was able to leave the heels to come home and wear flip-flops in the park at Musicfest. And I feel like I’m still giving back. I moved to Africa to give back to their community, and now I give back to this community with free concerts.”

* The Explore Tourism and Hospitality Career Expo is a partnership between Fleming College and Regional Tourism Organization 8. The event was an opportunity for Fleming students, high school students, and guidance counsellors to explore the great career opportunities within the tourism and hospitality industry.