It went straight to his core – that feeling of finding his calling – and it happened at a weekend glassblowing class in Red Deer, Alberta.

“As soon as I put the pipe in the furnace, I just knew: this is my passion,” said Paul van den Bijgaart, who was working as a cabinet maker and lighting repairman at the time (2007). “It’s a very rare feeling. There are very few times in my life where I’ve felt that passionately and absolute about something.”

A friend of Paul’s mother had encouraged him to sign up for the beginner glassblowing class at Red Deer College, believing it would benefit his work on lighting fixtures. Paul loved it and used the money he earned at his full-time job to continue practicing glassblowing at a studio in Edmonton.

When the studio closed two years later, Paul decided it was time to fully immerse himself in his craft. He moved to Haliburton, Ont., to take the Glassblowing certificate at the Haliburton School of Art + Design.

“Haliburton was really a changing ground of an intensive few months to see if I really wanted this. It really was a make or break,” said Paul, who describes the experience as life changing.

Every morning he walked across the frozen lake to the Haliburton Campus, where he poured his energy into glassblowing all day. He only left the campus when he was either exhausted or had plans with his friends.

“It’s a magical place to pick up a serious amount of skill in a short amount of time,” said Paul, who credits the school with developing his confidence. “The teachers would push you outside of your comfort zone. When I first got to Haliburton, I asked an instructor how to do something and they said to me, ‘Try, go do it– don’t be scared to fail!’ That continues to contribute to my artistic endeavors to this day.”

After graduating from Fleming College, Paul continued his studies at Sheridan College. During his first year in the Craft + Design program, he met Amy Yang, a talented artist from China with a sleek aesthetic and background in design. The couple became a designer/maker team and traveled together after graduating. 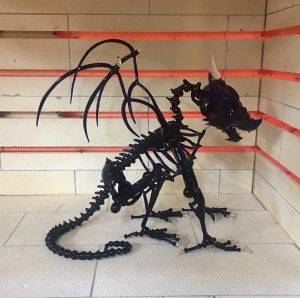 The original plan was to move to China to get married and then return to Canada, but that plan changed when Paul got the opportunity to teach a workshop in Shanghai.

The couple now works with institutions in China, including the China Academy of Art, and continually returns to Canada to teach workshops.

One difference between glassblowing in Canada compared to China is that hot glass has only just begun growing in popularity as an artistic material in China, said Paul.

“Historically, the Chinese have used glass to mimic other materials, like jade and stone. They typically perceive those naturally formed materials as more valuable,” he explained.

In addition to the perception of glass, the other challenge Paul faces is the language barrier.

“I always thought glassblowing was the most difficult skill I’d acquire in my life, but learning to read, speak and understand Chinese has definitely challenged that,” he said. “My New Year’s resolution was to lead workshops in Chinese and this year in September I was the main translator at an arts event.”

Living in China has helped Paul grow as a person and as an artist. “It’s interesting to rewire your brain. The way they experience and view a lot of everyday objects is very pictographic. For instance in English we say ‘tornado’ and we can picture what that means, but in Chinese it’s ‘long juan feng,’ which literally translates to ‘dragon rolling wind,’” said Paul. “It’s like learning to view the world in a different way.”

Paul returns to Canada to teach intensive classes, but continues to grow roots in China. He is currently creating his own glassblowing studio in Beijing and plans to open a studio in Edmonton one day. 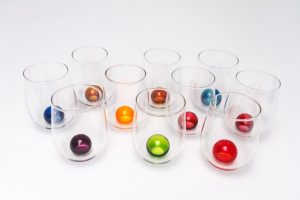 “I enjoy everyday objects people can use; a glass of wine at the end of the day, a handmade carafe at the side of your bed,” he said. “It’s important for people to engage with the maker community and for them to understand the work that goes into handmade objects.”

As Paul grows his business, he continues to enjoy the glassblowing process.

“It makes me feel almost every emotion I can imagine: it’s frustrating, calming and relaxing, I can drift away sometimes because it’s repetitive, other times it’s very intense, assessing multiple components simultaneously, it’s a mixture and a  balance,” he said. “Not to bring it back to Chinese philosophy, but there’s a yin and yang to it; you have to get frustrated to know to calm down. I’ve learned philosophy through the material, and found that it can take you to magical places if you’re willing to forget what you know.”