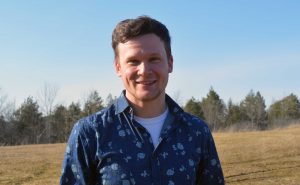 When Kevin D’Innocenzo gave a passionate presentation on “Bringing Back Heritage Minutes” to his Museum Management and Curatorship peers six years ago, little did he know that not only would more Heritage Minutes air, but that Kevin himself would earn a job at TVO.

TVO is a provincial television station that airs educational programming. At their Toronto-based office, Kevin works diligently as the Media Researcher/Archivist.

“The best thing about my job is getting to represent the diversity of Ontario through media and having the opportunity to influence Ontarians across the province,” said Kevin. “It’s humbling to have that responsibility.”

“Did my Fleming education prepare me for my job? Absolutely,” said Kevin, who graduated from the Museum Management and Curatorship program in 2012. “My responsibility during the exhibit in MMC was to research, negotiate and license the exhibition we put on at Peterborough City Hall. It’s called ‘We Were There: Stories of Peterborough in Times of Conflict’ and it’s still there– we got to do a permanent exhibition.”

After earning his Bachelor of Arts in History at Trent University in 2007, Kevin travelled the world, and taught and developed English curriculum in South Korea. “After spending several years overseas, I realized my affection for ethnographic studies. Paired with my lifelong love for museums, it was a natural choice for me to pursue dreams of working in the field of cultural heritage,” said Kevin.

From 2012 to 2013, Kevin served as an E-Volunteer at the Royal Ontario Museum and then was hired as a Project Assistant on contract at the Ontario Museum Association for a year. In 2014, Kevin was hired as an Exhibitions Consultant at Lord Cultural Resources, the world’s largest cultural professional practice that plans and designs services in the museum, cultural and heritage sector.

In July 2017, Kevin was ready for a change and took a job at TVO in the archives. “Seeing my name on the credits of The Agenda with Steve Paikin for the first time, I was like, ‘mom, take a picture!’” he laughed.

Kevin recently returned to his old stomping grounds at the Fleming Annex, Peterborough Museum & Archives, to speak with current Museum Management and Curatorship students about his career path and college experience, as well as to share advice.

Kevin’s tips to current students are:

Kevin said he recommends this Fleming graduate certificate program because it prepares students for the real world.

“There’s a theoretical component of the program, but what sets it apart is the applied learning, which I was able to take with me and use to this day.”