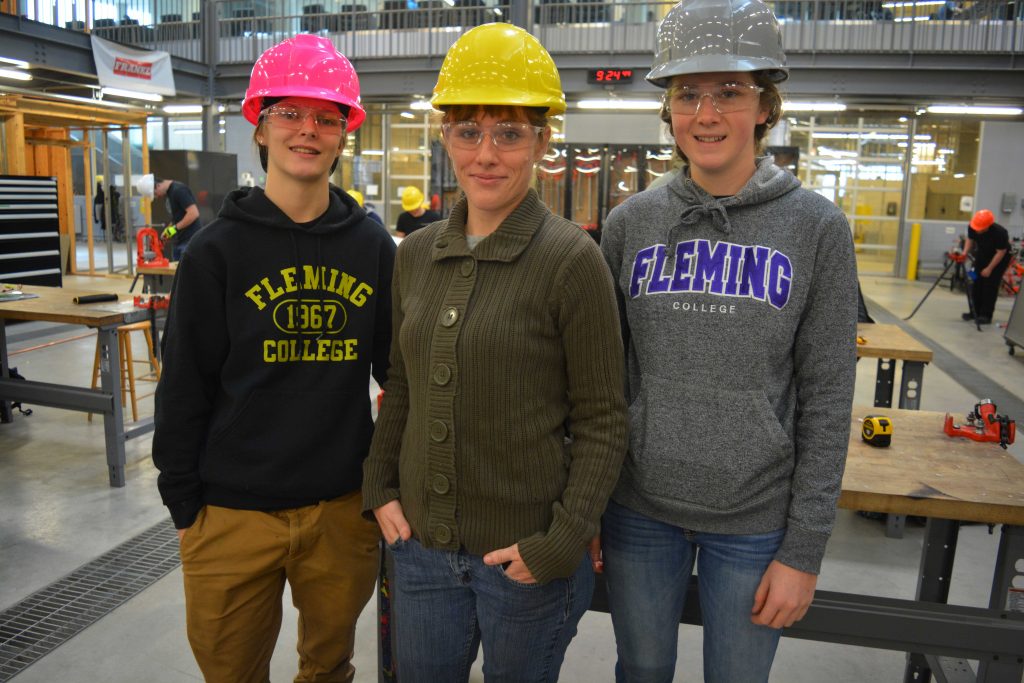 When you walk into the multi-story KUBE structure in the Kawartha Trades and Technology Centre, Mechanical Techniques – Plumbing students Amanda Hancock, Amy French and Kayla Wilford do not stand out amongst the group of students welding pipes, finding parts, and polishing finished projects.

“I don’t feel any different,” said Amanda on being a woman in trades. “They help when needed and I love it here.”

Amanda’s classmate Amy agrees, adding, “We all help each other out.”

It wasn’t too long ago when there weren’t many female students in trades programs at Fleming College. Since 2014, when the Kawartha Trades and Technology Centre opened at the Sutherland Campus, enrolment of female students grew from 3 per cent to 12 per cent.

Mechanical Techniques – Plumbing program coordinator Neil Maika said that while trades may still be a male-dominated industry, women employed in trades careers is on the rise.

“There is an immense opportunity here. Multiple employment paths are becoming available,” said Neil. “Also, all of my students are great. They respect each other, they help each other, and they are all very professional. All students are treated equally by both faculty and their peers, whether female or male.”

First-semester student Amanda said she did have some concerns before she enrolled.

After hearing amazing things about Fleming College from her brother, who took the Heating, Refrigeration and Air Conditioning program, Amanda decided to give trades a try three years after graduating from high school. Amanda chose the plumbing program based on the recommendation of her friend’s stepfather, who is a plumber and loves his profession.

“I was worried about it myself, but they’re all nice. It’s no different being a girl here,” said Amanda. “We’re no different if we can do the job. And all the guys here are very friendly, kind and supportive.”

Her classmate Kayla, on the other hand, had no hesitation enrolling in the Mechanical Techniques – Plumbing program right after high school.

“I spent the last two summers working in trades with a friend. I helped with renovations, basic labour, installing showerheads, things like that,” said Kayla, who graduated from Thomas A. Stewart Secondary School last year. “I was torn between going straight into an apprenticeship or taking this program. I decided to take this program to help figure out if plumbing is the trade I want to do, instead of going straight into a specific apprenticeship.”

In the Mechanical Techniques – Plumbing program, students learn a variety of trade-specific skills. They are also introduced to installing, maintaining and repairing piping systems in residential, commercial and industrial settings to enhance employment opportunities.

Amy French, a mature student who started college after having children, said she chose the program based on job prospects.

“I’m told women in trades are wanted and needed, and specifically asked for, so here I am,” said Amy. “I chose plumbing because plumbing was the most expensive construction cost, and I want to build my own house one day. I feel like it’s the right career path.”

Amy said she feels being a mature student gives her an advantage. She feels more mature now than she did right after high school, she doesn’t party, and she is very focused on finishing school.

Her advice to current students is don’t be afraid to ask for help.

Amanda added that there are many resources available for help, such as asking faculty when you have questions, signing up for tutoring, and taking advantage of D2L.

Kayla reminds students to stay focused on school. “Pay attention, get your homework done, get your projects done—focus,” she said. 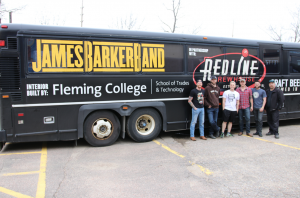 Fleming College’s School of Trades and Technology teamed up with the James Barker Band to transform a GO Transit bus into a tour bus. With the help of Trades faculty, Carpentry, Electrical, Plumbing, and Welding students renovated the bus to include bunk beds, a lounge, washroom, two dinette tables, and kitchen area.

“This was such an amazing opportunity for our Trades students, as it provided a real life industry scenario. It took the student completely out of their normal setting and 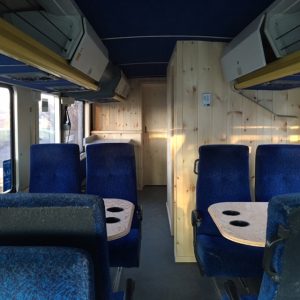 required them to be creative at times and to think outside-the-box,” said Paul Jordan, lead faculty on this project. “It showed a student that you had to figure things out on the fly and be able to adapt or change as needed to make a concept work.”

The opportunity came from a discussion Paul had with James Barker, who is a friend of his, when James asked Paul for ideas on how to refurbish a bus into their tour bus. After brainstorming, Paul realized this would be an amazing project for Fleming College students.

With only a seven week time-frame and no blueprint (other than the layout wanted by the band), the team at Fleming’s School of Trades and Technology got to work: 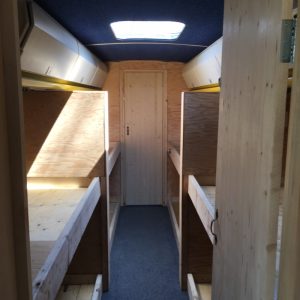 The completed James Barker Band tour bus features a lounge, eight bunks, a kitchen area with a sink, fridge and microwave, a washroom with a shower and toilet, and a dining area with two dinette tables.

“Without the tremendous support of the administration, faculty and students in their respective trades that were required to complete this project, this would never have been so successful,” said Paul. “This was such a positive project as faculty had students knocking at their doors asking if they could help out on the bus on their own time.”

Patti Gilchrist is one of the Carpentry Technician students who helped renovate the bus.

“I enjoy the work and I thought it would be interesting, I’d get to learn some new things, and be able to work with the instructors here with us,” said Patti. “Plus, I’ve motorhomed all my life, my dad’s taken us all over in a 40-foot motorhome.”

Patti said the experience has been amazing. “Seeing it drive away knowing we all did this for a band and we all work so well together, I think it’s nice. And we got to know our teachers more,” she added.

Rod McLeod, Chair of the School of Trades and Technology, is proud of the work Fleming faculty and students did on this project.

“Paul Jordan was the lead faculty on the initiative and did a tremendous amount with the project,” said Rod. “Faculty members Susan Brown, Gord Knox, Jason Jackson, Rick Murdock, Aaron Lishman, and Darren Cavanaugh helped bring this to fruition and did amazing work with their students. It was a great project that the students truly enjoyed.”

The James Barker Band picked up the bus on Sunday, April 23 and has been using it on their Canadian tour.

“It’s been perfect. I know if we did it on our own it wouldn’t be close, it is unbelievable how great it is and how good of a job they did,” said James Barker. “It’s been super comfortable, it’s been great, I’ve gotten some good sleeps on there. We have an Xbox One set up in the back so we have that going, too.”

The band plans to return to Fleming College in the future for upgrades, and to continue this project and collaboration with the School of Trades and Technology. One idea for phase two is for Electrical students to incorporate solar panels for charging the battery bank. 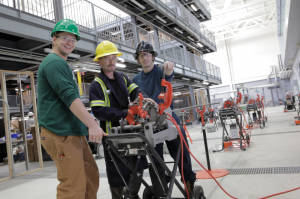 World Plumbing Day is celebrated annually on March 11th to recognize the impact plumbing has on our health and safety. As an Educational Institution Member of the Canadian Institute of Plumbing & Heating (CIPH), Fleming College is proud to join the celebration and raise awareness of the important role played by the global plumbing industry.

“World Plumbing Day is a great opportunity to recognize the important work of plumbers,” said Jason Jackson, Mechanical Techniques – Plumbing program coordinator. “Plumbers provide important services which contribute to maintaining the health of communities, including proper installation of drains, waste, and venting systems along with potable piping and other mechanical systems.”

Mechanical Techniques – Plumbing instructors are training the next generation of plumbers and water systems operators in Fleming’s Kawartha Trades and Technology Centre. This program introduces students to installing, maintaining and repairing piping systems in residential, commercial, industrial and municipal settings.

“This program really prepares graduates to hit the ground running. Our students gain experience in piping, legislation, and application of code related to plumbing. When they graduate, they have the knowledge and practical skills to enter into a plumbing apprenticeship and/or become employed in a number of mechanical trades,” said Jason. 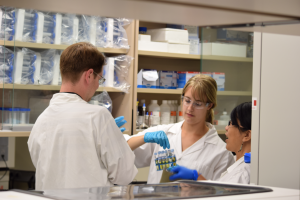 As global water concerns grow, the need for solutions to protect water sources and mitigate water quality issues also grows. For more than ten years, Fleming’s Centre for Alternative Wastewater Treatment (CAWT) at the School of Environmental and Natural Resource Sciences has been working with governments and industry to research, develop, and test leading-edge water and wastewater technologies.

“Access to clean water is a universal concern that requires a multitude of techniques and technologies to deliver,” said Jeremy Kraemer, Director of the CAWT. “At the CAWT, we work with many different companies on a range of solutions that improve water quality, management, and stewardship. We salute the plumbers and water systems operators that put these and other innovative technologies to use.”

The MAXIMUM Design Challenge was presented by Canadian Tire in partnership with Fleming’s School of Trades and Technology. Ten teams of cross-disciplinary Trades and Technology students were challenged to build an outdoor structure with an electrical component between 8:30 a.m. to 2:30 p.m. All participating teams were provided with the same tools and materials to complete the project.

“The MAXIMUM Design Challenge event was a huge success!” said Jan Watson, event organizer and KTTC Employment Market & Student Success Specialist. “I am so very proud of our Trades students and what they developed and built under tight time constraints. The projects were extremely creative, well-thought out and elaborate.”

“I am also very proud of how all the students worked so well together in their teams, despite being from various trades programs and not knowing one another prior to the competition. The objective of selecting individuals from the different trades’ disciplines within the School was to emulate real-life industry—each and every one of the competitors rose to the challenge!” said Jan. “Thank you to all those involved: our partners at Canadian Tire/Maximum Tools, our 48 competitors, and our enthusiastic Fleming College Trades faculty and staff.”

15 prizes were given at the event, including five 1st Place prizes consisting of a Maximum™ 20V Max Li-Ion Brushless Hammer Drill & Impact Driver Combo Kit; Maximum™ 1/4-in, 3/8-in and 1/2-in Drive Socket Set, 168-pieces; and a $100 Canadian Tire gift card. Each first place prize has an approximate retail value of $800.

Watch a time lapse of the competition in action: