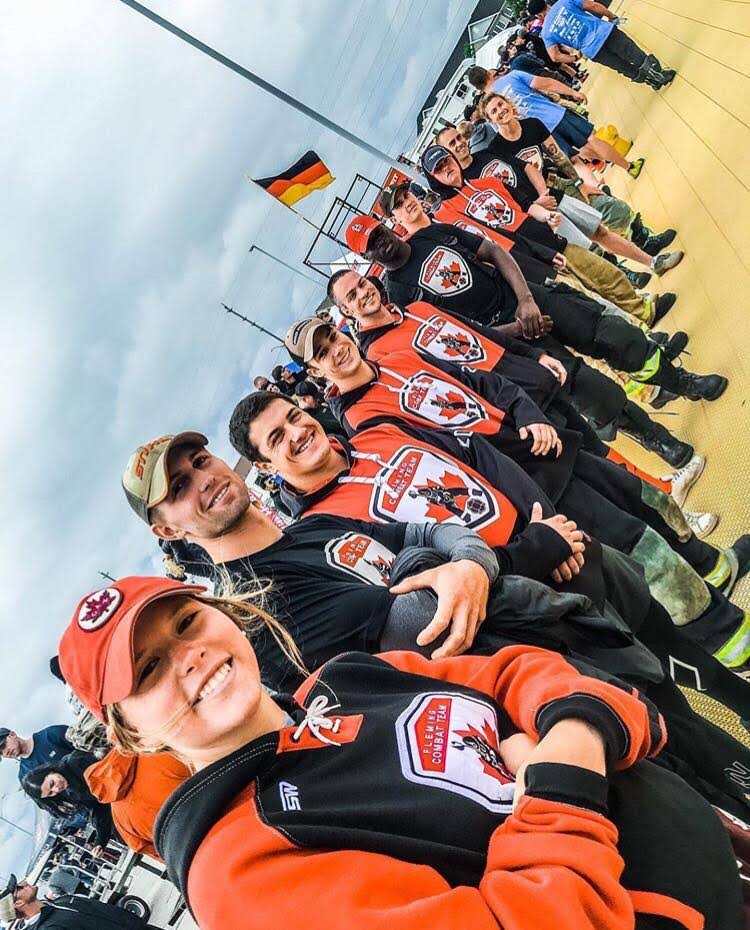 Peterborough ON – (September 24, 2019) – For the sixth season in a row, Fleming College Pre-Service Firefighter students teamed up to compete in the Scott FireFit Champions, which puts firefighting fitness to the ultimate test. The event took place in Oshawa at the Legends Centre from Sept. 11 to 15.

Nine students and six coaches competed at the Championships, with four of the team members qualifying for the Worlds. John MacKinnon, Bowman Allan, Declan Fitzpatrick and Emily Dickinson will compete at the World Firefighter Combat Challenge in Alabama later in October.

Declan Fitzpatrick earned 2019 FireFit National Rookie of the Year. Fitzpatrick, Pre-Service Firefighter Education and Training, achieved a time of 1:24 in his first year competing in FireFit, making him the fastest new competitor in Canada.

“I got involved in FireFit for the challenge and for career networking opportunities and it didn’t take long for me to get hooked on the camaraderie and fierce competition of the sport,” said Fitzpatrick. “I also enjoy the training just as much as the competitions. It will be a privilege to represent Fleming College at the Worlds Challenge. I hope to put down a time that will positively reflect on the team and our school.”

The head coach is Whitby Firefighter and instructor for Fleming College, Shawna Coulter. Several past team members are now employed as firefighters and have also joined the coaching contingent to give back to the community and assist new members achieve personal and athletic success through the sport.

“I am proud of the team’s outstanding effort and dedication, it is a huge commitment for these young people and often a juggling act between academic, work and training schedules,” said Coach Shawna Coulter. “The competition extends beyond extreme physical fitness; it embodies team work and incredible sportsmanship. For me as a coach and the other amazing individuals that volunteer to coach, it is about encouraging the students to redefine their self-belief, to understand they are capable of anything they set their mind to. It is about developing the tools of self-wellness, both physically and mentally. It’s those tools that will help them not only in their careers as future firefighters but in life in general.”

The Scott FireFit Championships is a competition based on firefighting tasks commonly performed in emergency situations. A course comprised of six grueling physical tasks test the strength, endurance and overall fitness levels of firefighters. Competition categories are available for men and women, offering both individual and team relay competitions.

The connection between team involvement and career success is backed by an incredible statistical record of over 85 percent of alumni being employed full-time or part-time in their field in emergency services within a year and a half following graduation. Academic success of team participants follows suit, with 86 percent of year end academic and community service awards earned by team participants.

Can’t imagine what competing in the FireFit Worlds & Canadian National Championships would be like? Nick Collings, Fleming Fire Combat Team member, gives a glimpse of what it is like in this video of his individual run at the Championships.