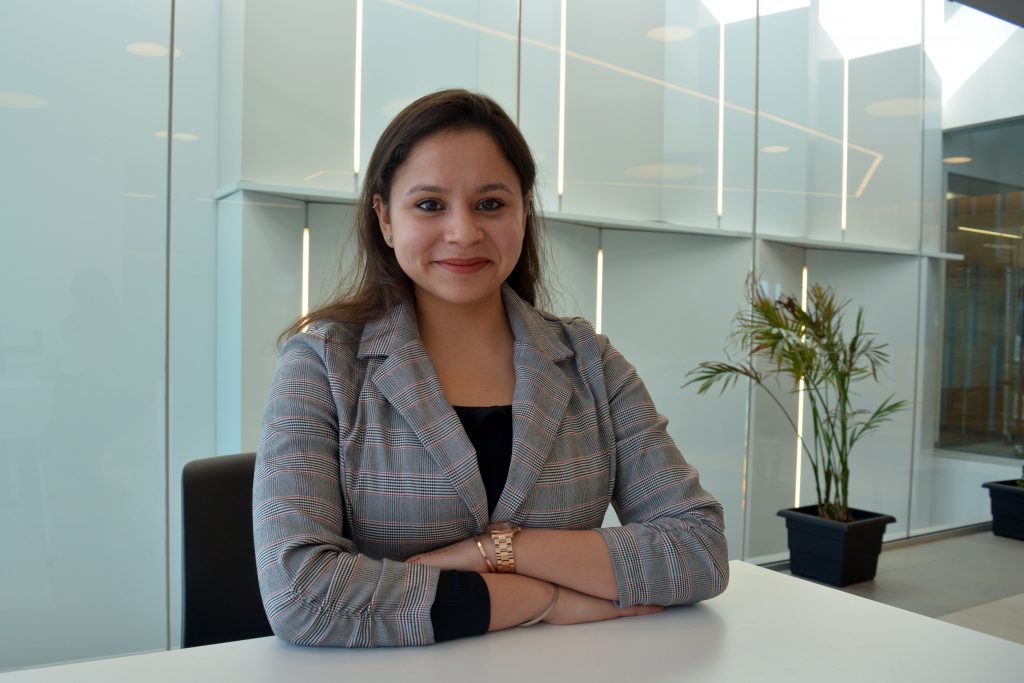 In Canada, only one third of graduates in science, technology, engineering and math – also known as STEM – are women. By increasing women in STEM subjects, we can fuel change that will impact our future, which is why the theme for International Women’s Day this year is #InnovateForChange (source: Status of Women Canada).

Manveen Kour is part of that change. Having studied electronics and communications at the University of Jammu, Manveen is adding a graduate certificate to her resume by taking Fleming College’s Wireless Information Networking program. She plans to grow her career in IT after graduating this spring.

“When I go to clients and look around their businesses, all I see are men. In an entire company, there is only a couple women!” said Manveen, who provides IT services through her Fleming applied project.

“I read online something like 20 to 30 percent of technology professionals are women, but I know companies want to hire women because equality is good. It’s not that the opportunity isn’t there, the women just have to go for it!”

One reason women are underrepresented in STEM subjects and careers, Manveen suspects, is because the interest isn’t nurtured from a young age.

“Where I’m from, India, there is inequality; boys are encouraged to take technology and women are not,” said the Wireless Information Networking student. “You have to encourage an interest in technology from the beginning, from your childhood.”

Manveen says she is fortunate her interest was nurtured from a young age the same way it was for her brother. She credits her father for this and feels very grateful for him.

“My brother would open up the computer and explore it because he was curious, and a lot of girls don’t do that because they’re not encouraged to,” she said. “The family plays a role in this and my father, right from the beginning, told me this is a great career and encouraged me. And I still call him when I have a question or dilemma, and he’s there.”

Manveen did feel encouraged by her family and teachers to study electronics and communications at the University of Jammu. During her university internship, she learned cloud computing and wireless networking, and really enjoyed it. She decided to enhance this skillset after graduating and moved to Canada for Fleming’s Wireless Information Networking program.

“Canada is very welcoming, I didn’t expect it to be so sweet! I love Canada!” said Manveen, adding that everyone she has met at Fleming College has been very helpful.

Faculty members Darren Gethons, Alwyn Appiah and Mamdouh Mina, in particular, are three instructors Manveen credits for their support and motivation. Manveen recommends any students who are struggling to speak with their professors for their help and guidance.

“When I was interviewed for my applied project position, I was against three boys. I was the only girl in the interview and I got it!” said Manveen. “I was scared being interviewed against them, but my dad told me he had this vision and I will get it and don’t worry—and I did!”

Manveen recommends this career path to anyone interested in it and to find someone to cheer you on.

“For me, that’s my father. He keeps me going,” she said. “Aim big and don’t settle. Never settle, know you deserve more. Like my father always says, ‘the sky is the limit!’”