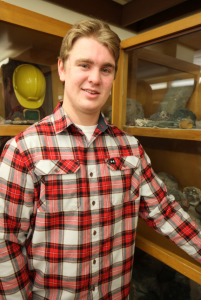 Garrett Hooey, second-year Earth Resources Technician student, has earned himself a spot in the hotly contested Student-Industry Mineral Exploration Workshop (S-IMEW). The workshop, which is hosted by the Prospectors & Developers Association of Canada, is an all-expense paid trip to Sudbury to learn about careers in the mineral exploration and mining industries.

Twenty-six of the top nominated Canadian geoscience post-secondary students are selected to attend the two-week workshop, and Garrett is the only college student. Garrett will have the opportunity to network, attend field trips to world class mining camps in Ontario and Quebec, and listen to lectures and presentations from May 4 to May 19, 2017 at Cambrian College.

“Having the opportunity to attend this workshop is something I can’t even explain, I’m beyond thrilled,” said Garrett. “The fact that it’s predominantly dominated by university students speaks to Fleming College’s reputation.”

Garrett says he is looking forward to the mentorship opportunities at the S-IMEW. “There’s going to be high-end mentors who are going to be there, professionals in the field to steer you in the right direction and give you advice, and that’s important to me,” said the Fleming College Earth Resources Technician student. “As my career goal is to get into mineral exploration – whether it’s off into the mountains or in the deserts or over flat ground – being able to be selected and attend the Student Industry Mineral Exploration Workshop, there’s going to be so much information to take in and soak up like a sponge.”

Garrett decided to pursue this career after playing Major Junior Hockey for the Ontario Hockey League for five years. “Being an outdoorsman, it’s something to test your limits– and finding gold was the underlying reason why I wanted to get into this program,” he said. Garrett added that there is family history in the industry as well. “My great-grandfather was a mineral exploration surveyor and my grandfather was a mineral exploration chemist for a couple years back in his day.”

Garrett said he enjoys the Earth Resources Technician program at Fleming College because of the course material, labs, lectures, field trips, facilities, and faculty. “What I like best about the Earth Resources Technician program is essentially everything,” he said. “Everything just kind of adds up and it’s been one of the best experiences I think I could possibly ever have.”

Faculty member Joanna Hodge nominated Garrett for the S-IMEW because of his passion for mineral exploration and because he is a class leader. “I’m excited for Garrett that he has this opportunity, which I think will benefit his career immensely,” said Joanna. “The workshop is highly contested by geoscience students around Canada, most of whom are studying at university, so it speaks highly of our program that we can nominate students who compete with the best students in the country.”

Joanna added, “I’m a little envious, I’d really like to attend the course myself!”